Thousands of veterans are joining lawsuits against the 3M Company for knowingly providing the military with defective combat earplugs. Last year, 3M agreed to pay the U.S. government $9.1 million dollars to resolve allegations that 3M knew its earplugs were defective and sold them to the armed forces anyway. 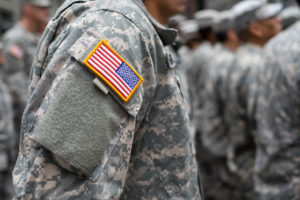 If you served in the military between 2003 and 2015, used 3M Combat Arms Earplugs, and have been diagnosed with – or suspect you may have – hearing loss or tinnitus (ringing of the ears), you may have a claim against 3M for your injuries.

Keep reading to find out everything you need to know about the 3M lawsuit, and how we can help you get justice for unnecessary injuries you suffered while serving in our armed forces.

THE LAWSUIT AGAINST 3M

Thanks to the acts of a courageous whistleblower, over a decade of deception that resulted in harm to our military servicemen and women has finally been brought to light. Based on information provided by that whistleblower, the Department of Justice sued 3M, alleging that 3M sold the dual-ended combat arms earplugs U.S. military between 2003 and 2015, without disclosing that they were defective. The DOJ alleged that 3M knew that the earplugs would loosen and would not provide the noise protection 3M claimed.

“Today’s settlement will ensure that those who do business with the government know that their actions will not go unnoticed,” said Frank Robey, director of the U.S. Army Criminal Investigations Command’s Major Procurement Fraud Unit, in a press release by the U.S. Department of Justice. “Properly made safety equipment, for use by our Soldiers, is vital to our military readiness. Our agents will respond robustly to protect the safety of our military.”

This lawsuit by the U.S. government is only the beginning of efforts to hold 3M accountable for the injuries these ear plugs caused. Large numbers of injured veterans are now bringing their own lawsuits against 3M, seeking compensation for their injuries.

Here are some quick facts on the case:

3M KNEW ABOUT THE PROBLEM BUT FAILED TO TAKE ACTION

The Department of Justice’s lawsuit alleges that 3M employees knew about the earplug defects as early as 2000. They were aware that the earplugs were too short for proper insertion, and that the issue would cause military personnel to be unprotected from exactly the sort of noises that the ear plugs claimed to protect against. 3M falsely claimed that the earplugs complied with military safety standards, and failed to disclose the design flaw to the U.S. military in order to profit from the contract.

By agreeing to the $9.1 million payout, 3M settled the lawsuit, but admitted no liability.

HOW THE EARPLUGS AFFECTED OUR MILITARY

Tinnitus is the most common disability experienced by veterans, with over 2.7 million receiving benefits for it. Military personnel are exposed to extreme levels of noise, and protecting against it is critical for their safety, mission readiness, and post-service health. Even with earplugs that have been properly designed, military service poses a risk of hearing damage. 3M’s knowing disregard for the safety of military personnel, which included concealing information it knew about the shortcomings of its ear plugs, the risks to military service members’ hearing has only gotten worse.

Army veteran Joseph Junk said, “What is quiet? What’s peace? I know for me personally, I don’t have it. All I hear is ringing if there’s no noise around me. If I do not have noise around me, it’s maddening. It is torture.”

DO YOU HAVE HEARING LOSS FROM MILITARY SERVICE?

If you served in the U.S. military, and have not had your hearing checked, it’s important you do so as soon as possible. If you have any of these symptoms, see your doctor for a hearing test:

Hearing loss or tinnitus can be a difficult condition to live with. The inability or hardship of following conversations may cause sufferers to avoid social situations, and lead to feelings of isolation and depression. Tinnitus causes veterans to be constantly hounded by a ringing sound that can irritate and frustrate the individual. Those with any kind of hearing problem will often find that they are unable to enjoy music or movies like they were once able to.

If you served in the military between 2003 and 2015, used 3M dual-ended, and have been diagnosed with hearing loss or tinnitus, you may have a claim against 3M for your injuries. If you have not been diagnosed, but have any of the symptoms above, see your doctor immediately, as you too may qualify.

PRICE ARMSTRONG 3M EARPLUG LAWSUIT LAWYERS WILL FIGHT FOR YOU

Our qualified attorneys can help you through the process of seeking compensation for your suffering. Although money can never make up for your injuries, you deserve justice, and the experienced lawyers at Price Armstrong are ready to seek justice for you. 3M chose profits over safety, and it’s time to hold them accountable. Contact us for a free consultation today.