The Stark Law and Anti-Kickback Statutes

The Physician Self-Referral Law, commonly known as the Stark Law, and the Anti-Kickback Statutes are two federal laws that protect whistleblowers and prohibit a wide range of conduct by healthcare providers.

Those with knowledge of kickbacks, or bribes, by healthcare providers are in a unique position to protect vulnerable patients. Whistleblowers can call attention to decisions made in the financial interests of a provider, and not in the interests of the patient. The attorneys at Price Armstrong can help those seeking to report Medicare fraud – contact us if you are aware of any Stark Law or Anti-Kickback Statute violations.

The Stark Law, as it is known, prohibits a physician from referring a Medicare or Medicaid patient to an entity with whom the physician or their immediate family member has a financial relationship. This financial relationship can include not only an ownership interest, but also a compensation scheme or even an agreement to pay the physician amounts far exceeding market value for their services. This law applies only to physicians and only to certain designated health services including:

The law also prohibits the organization providing these services from seeking payment from Medicare or Medicaid for services given as a result of a prohibited referral. There are some exceptions to this general rule.

For those services above, a doctor cannot refer a patient to receive the service at an organization in which he or his family has a financial stake, and thus stands to benefit from. The flip side of that is the organization is not allowed to seek Medicare or Medicaid reimbursement for services arising from that referral.

Violations of the Stark Law most commonly come from compensation agreements rather than ownership agreements. Some examples are conspiracies between entities and physicians for laboratory services. Providers and physicians have also been found liable for compensating doctors for cancer medications.

The penalties for physicians and companies that violate the Stark Law can be incredibly costly:

Plain violations of the Stark Law do not require an intent to break the law. However, for civil monetary penalties, program exclusion, civil assessments, and False Claims Act Liability, the violation must have been done knowingly.

The Anti-Kickback Statue (AKS) is somewhat similar to the Stark law. The AKS prohibits offering, receiving, paying, or soliciting anything of value to induce or reward referrals or generate Federal healthcare business.

For example, in a kickback, also known as a bribe, the organization pays a provider to either refer a patient or purchase a piece of equipment and then seeks reimbursement from the federal government. The organization attempts to initiate a transaction that will increase profit. Other examples of kickback include:

The AKS is worded very broadly and is often wielded against hospitals, medical device companies, other healthcare entities, and even physicians. 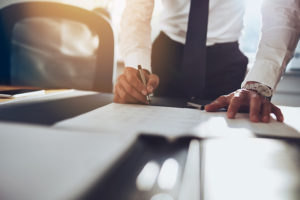 The AKS Is Different from the Stark Law in Several Important Ways:

What Is a Safe Harbor?

A safe harbor describes various payment and business practices, that although would typically result in a violation of the anti-kickback law, are not treated as an offense under the statute. There are numerous safe harbor arrangements and the most commonly used safe harbors include:

Healthcare providers that are reimbursed through Medicare and Medicaid are parties to agreements with the government. This makes them government contractors and, most of the time, subject to the False Claims Act (FCA).

What Is the False Claims Act?

The FCA also allows individuals with knowledge of false claims, or whistleblowers, to file suit on behalf of the government to recoup monies that have been fraudulently obtained by contractors, including health care providers.

Protection and Rewards for Whistleblowers

When a whistleblower initiates a case under the FCA, they file their complaint under seal, making them highly confidential. It also offers these whistleblowers legal protection from employment retaliation if they work for the healthcare provider when they file a complaint alleging an illegal kickback scheme.

The rewards for both the government and the whistleblower can be significant. FCA cases for violations of the Stark Law and Anti-Kickback Statutes in the past few years have been substantial—recovered amount ranged from $1.2 million to $237.5 million.

Because it’s difficult to detect kickback schemes from a pure auditing perspective, whistleblowers are crucial to a great number of these FCA cases.

Reporting a Stark Law or Anti-Kickback Statute violation through an FCA case is extremely difficult and complex. Drafting complaints under the False Claims Act and working with the Department of Justice requires a close attention to detail, hard work, and knowledge of the elements of a successful kickback claim. That’s why it’s important to consult a knowledgeable medical fraud attorney.

Whistleblowers can face severe personal and professional harm for reporting fraud if they are not backed by an attorney who knows the law and the process of an FCA case. The attorneys at Price Armstrong have experience in successfully representing whistleblowers in FCA cases. If you have information about a kickback scheme, an attorney at Price Armstrong is available for a free consultation regarding your options.

When does the Stark Law and Anti-Kickback Statute apply?

The Stark Law applies only to referrals from physicians and certain itemized services to be paid by Medicare and Medicaid. The Anti-Kickback Statute applies to any referral regarding any expenditure that any federal government healthcare program will pay for.

Is there a risk to losing my job if I report what I know about an illegal kickback scheme through a False Claims Act lawsuit?

No. The False Claims Act protects whistleblowers from employment retaliation for those who file a case on behalf of the government.

Are there ways to report what I know about an illegal kickback scheme if I do not wish to file a lawsuit?

If you have been harmed by a defective product, a financial institution or other business, contact the attorneys at Price Armstrong. We can help you seek justice and protect your rights throughout the process. We represent clients nationwide with offices in Birmingham, AL, Tallahassee, FL and Albany, GA. Call us today at (205) 208-9588 for a free initial consultation and review of your case. Let us fight for you – call now!